Working together to promote the economy of wellbeing 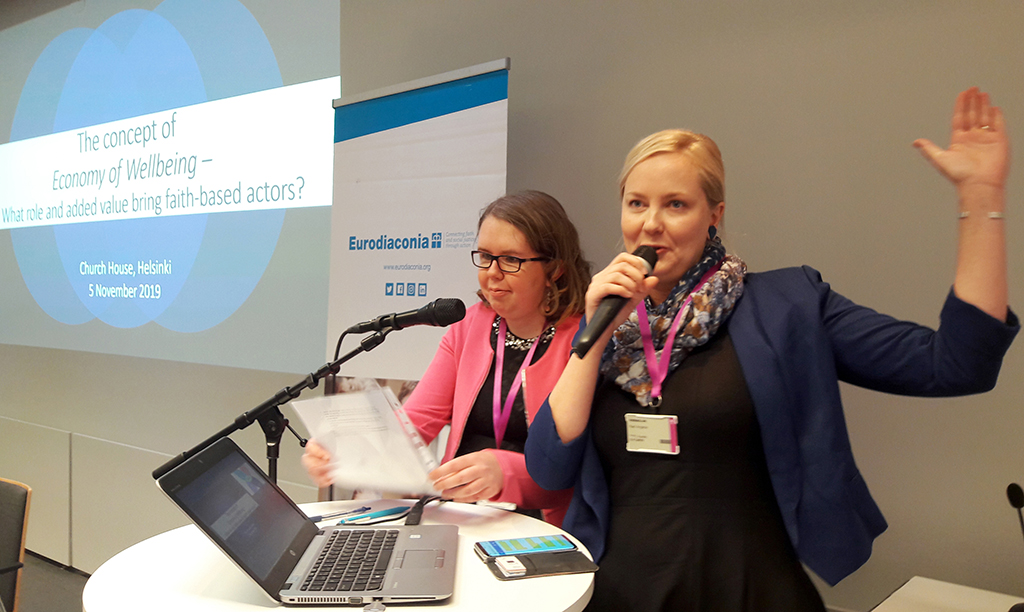 In addition to the presentations, the programme of the Roundtable on the Economy of Wellbeing, held in Helsinki, also featured presentations of best practices. Isabella Taipale and Katri Angeria spoke about the experiences of the Deaconess Foundations’ Vamos work on how involving young people in their own affairs strengthens their wellbeing.

Putting people’s well-being at the centre of all policies and decision-making is crucially important, the Finnish Evangelical Lutheran Church, Eurodiaconia and the Deaconess Foundation emphasise in a joint statement issued 5 November.

“This is in line with the fundamental values of the EU, according to the three organisations. “A more coherent approach to linking social policies with economic policies and sustainable development is likely to lead to better competitiveness and economic developments within the EU; a strong focus on social policy is good for the economy and vice versa. And (…) the economy of wellbeing is likely to increase legitimacy and the feeling of trust in the EU, thus bringing the EU closer to its citizens.”

The joint statement welcomes Finland’s robust commitment to the economy of wellbeing during the country’s presidency of the EU. However, the organisations stress that the concept of a welfare economy should be implemented both at EU and national policy level. Concrete action is called for in this respect, both for the EU institutions and for member states.

“As Churches and faith-based actors, we are committed to working together with both the EU institutions, our ecumenical partners and other organisations at all levels, in order to enhance the wellbeing of both people, our societies and the planet,” the statement reads. The three signatories also wish to convey a message of hope and confidence to promote human rights and human dignity and inclusion.

The statement was released on in connection with a round table discussion on the welfare economy was organised in Helsinki 5 November by Eurodiaconia, the Deaconess Foundation and the EU activities of the Church Council’s EU work.

In her keynote address, Heather Roy, Secretary General of Eurodiaconia, said that the Council conclusions adopted at the end of October were revolutionary and that social welfare had moved from the periphery to the centre of EU policy.

“We want to be involved in developing the economy of wellbeing and thereby contributing to a socially, economically and environmentally sustainable Europe,” said the organisers of the roundtable.

Eurodiaconia is a European network of churches and independent Christian non-governmental organisations that provide social and health services and promote social justice.

Our capability to help the most vulnerable was enhanced

The capability of the Deaconess Foundation to respond to societal challenge…

The Deaconess Foundation will help people most in need of support, such as …