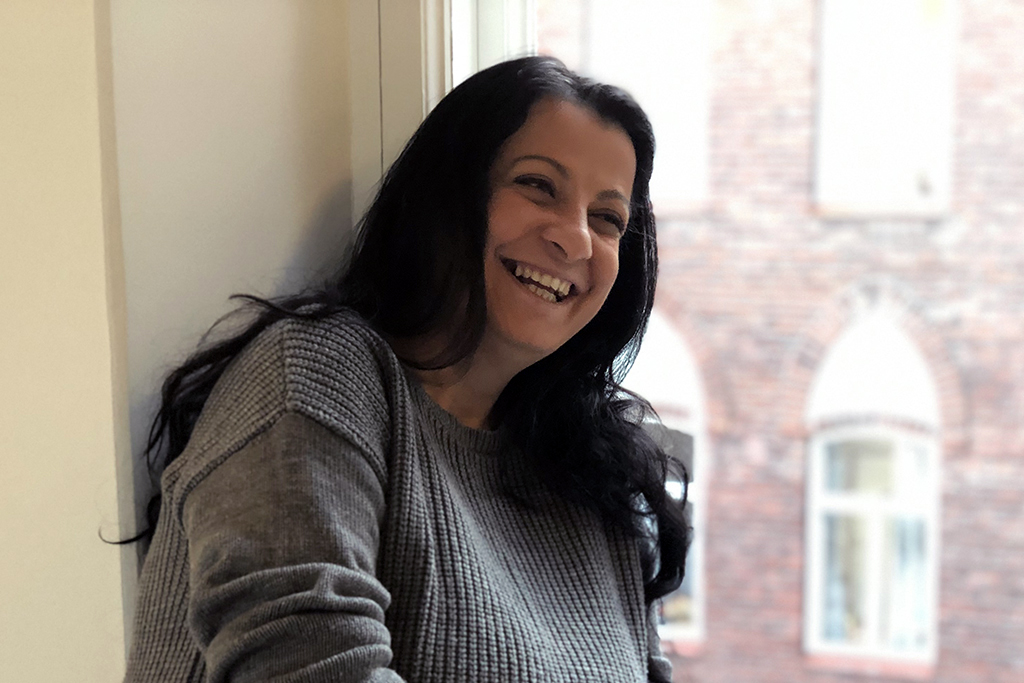 The Deaconess Foundation started the Roma community support project in the commune of Valea Seaca in Romania in 2015. About a year ago, E-Romnja, a Roma civil society organisation that asserts the rights of Roma women, became a local partner.  Anca Nica, who works for E-Romnja, is a feminist activist and the coordinator of the community project.

“It’s like my second home”, says Anca of Valea Seaca. “Whenever I go there, I get asked when I’m coming back home. I get that because I’ve a connection with the people there.”

Valea Seaca, located in north-east Romania, is a commune made up of two main villages, Cucova and Valea Seaca. Some four thousand people live there, a third of them the Roma with whom Anca has a special relationship, due to her own Roma background and human rights work with E-Romnja.

“There was nothing new or extraordinary for the Roma in Valea Seaca about the start of the project with Finnish input, but there was concerning my starting work there,” says Anca.

“When I got in touch with the Roma of the village and said that I was myself a Roma, married, and with a family, and that I already know Finns — and such like.”

“It was then that we shared our common connection with Finland, where many Roma had been to earn money for their families. They knew Helsinki, the Deaconess Foundation, and their own drop-in centre Hirundo. This shared world of experience gave us the scope to talk and helped us to get started.

“When people realised that I’m a Roma they thought maybe she can do something for us”, Anca says recalling the early days of her work in Valea Seaca.

“At first, they didn’t trust me, but trust started to develop when I became closer to them, step by step. It was an entirely normal growth of trust between people who are strangers to one other. You had to be ready for open interaction — because to achieve something, you have to be willing to give something yourself.”

Anca visits Valea Seaca for a few days once a month. Everyone knows her. She feels that the Roma community appreciates the community support project, the key feature of which is to improve the status of Roma women and girls.

It is their own resources, and the harnessing of them, that is essential for gaining a path to a better life.

“It can’t change the whole community, but it can change the lives of some individuals. And this change also affects us employees. We are involved in the process of change ourselves.

“It sometimes bothers me that although we’ve been doing this work for years, we haven’t seen any major breakthrough — that the problems would be solved — and that women would be revolutionaries in their own lives.”

For Anca, such expectations are not realistic, because women have other things in their lives — things that are more important to them, such as coping with the different challenges of everyday life, most of which concern their livelihoods.

“They do not have the privilege of being able to choose the sort of life they would like for themselves or what sort of relationship they have with their husbands, and so on. Everything in their daily lives is ultimately a question of survival.”

Anca finds that comparing the lives of Valea Seaca’s Roma with her own life is a sensitive matter. She has a university degree, a job, and an income — everything that most Roma lack.

“When I go there, I feel that I’m advantaged, because I can do this work and interact with a lot of important people. I’m there for some days and then I leave, but the Roma have to be there permanently.”

Half of Romania’s Roma live in rural areas, where local officials have much power. There’s widespread racism and discrimination. But Anca is a fighter who sorts out grievances, uses laws and regulations, runs campaigns — and gets things done despite the indifferent attitude of the authorities.

“We have a dialogue going with the authorities, but it isn’t ideal because of racist attitudes.”

Valea Seaca may seem like a hive of poverty, but it isn’t true of the whole village. Alongside people living in extreme poverty you find others who are very well off.

“We work with impoverished Roma, but we don’t exclude the rich, because wealth doesn’t insulate people from discrimination and racism. No matter how much wealth you may have, you’re Roma and you may still run up against problems because of your ethnic background”, Anca explains.

Unemployment and poverty force Roma to move around in search of livelihoods, in Finland and other places. There are many empty Roma family homes in Valea Seaca or ones where there are only grandparents living with grandchildren. The parents are away trying to get some income elsewhere in Europe.

“Life and living conditions have improved to some extent but not directly due to us. People have also been able to improve things themselves by going around Europe and obtaining income there.” 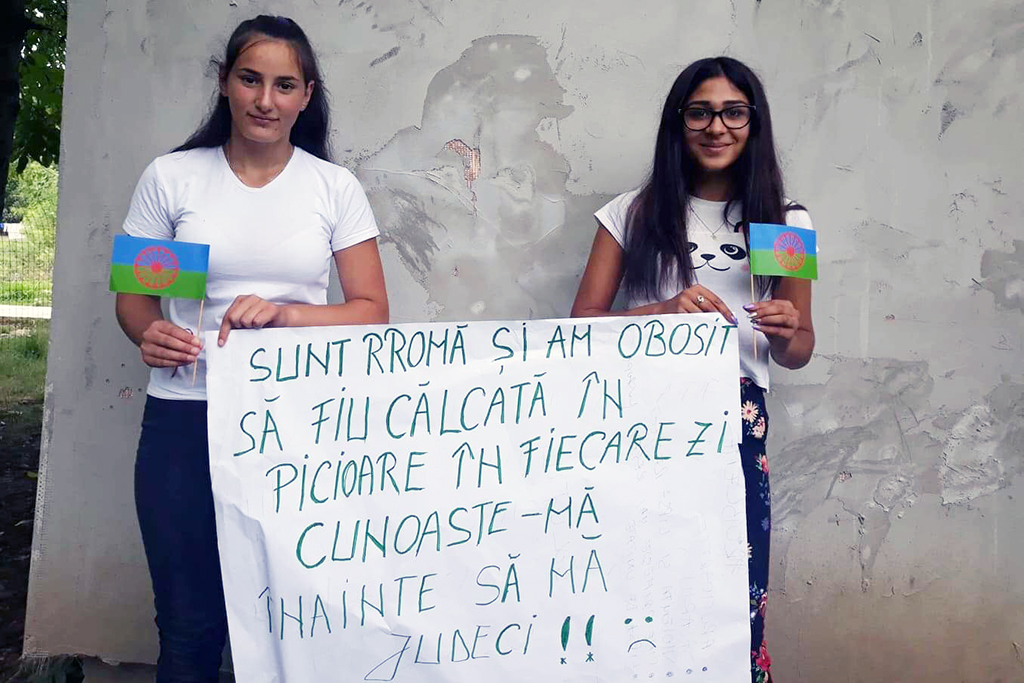 I’m a Roma and I’m tired of being walked over every day. Get to know me before you judge me.

Anca says that involvement in project activities varies greatly. Not all Roma are included. There are about 30 women who take part in group activities, but when you are campaigning for Roma rights, for example, you may have many times as many participants. Although they are not permanently involved in the activities, it is at these joint events that they become aware of our work and goals.

“We are part of this community, we belong here, and we cannot be ignored”, Anca affirms.

“This community and the fieldwork are very relevant to us in E-Romnja. When I talk to people and see their lives improved, I feel very proud. I am proud that I work in Valea Seaca and that our work has an impact and brings some good to people’s lives.”

She is proud of the women who take care of the community and create some good in it — and of the girl who at first didn’t want to complete elementary school, but who with support was able to finish and is now continuing her studies. When E-Romnja started working at Valea Seaca, there were no girls there who wanted to go to school. Now, 90 % of the girls in the project’s education support groups have continued their studies.

“Our project changed their lives, and the way they see them”, Anca stresses.

The support project has a community centre for Roma women in Valea Seaca that children have dubbed the Women’s Office. Women meet there on a weekly basis to prepare food for children and the community.

“Poverty hasn’t disappeared, but this sort of joint activity is important for the women. It’s an expression of solidarity among women – sisterly help from woman to woman. It’s good to make food and eat together because empowerment isn’t possible when you’re hungry.”

“Women are responsible for the project – and for the children. The conditions are a little better now that they have a place to go and exchange ideas. In this way their lives have acquired a little more meaning.”

Effectiveness on a low budget

“This project is a good example of how much impact you can have with relatively little money. The good results are generated by the attitude and spirit of the employees. Ideology is also needed: a feminist outlook helps us to see power relations – how we ourselves would want to be helped in such circumstances.

A good result is created by the attitude and spirit of the employees. Ideology is also needed; a feminist perspective helps us perceive power relations — how we ourselves would like to be helped in similar circumstances,” says Anca.

“It’s question of a changed mindset concerning friends, relatives, the community — when even one girl succeeds in moving forward in life, it affects the people around her for years afterwards.”

The community support project in Valea Seaca is being funded by the Helsinki Deaconess Foundation, the Helsinki Parish Union, Emmaus Westervik, and Emmaus Åland. The project also received support from Sewatek Ltd in 2018.

Combating Violence against Women during the pandemic
Read more