Rusalina Konstantinova and Nadezda Gerashenko are the leaders of the network of Roma women in Belarus.Transnational networks are helping discriminated Roma women to seek employment and become agents of social change. Roma Women Power project brings together Roma organisations from Belarus, Ukraine and Moldova. 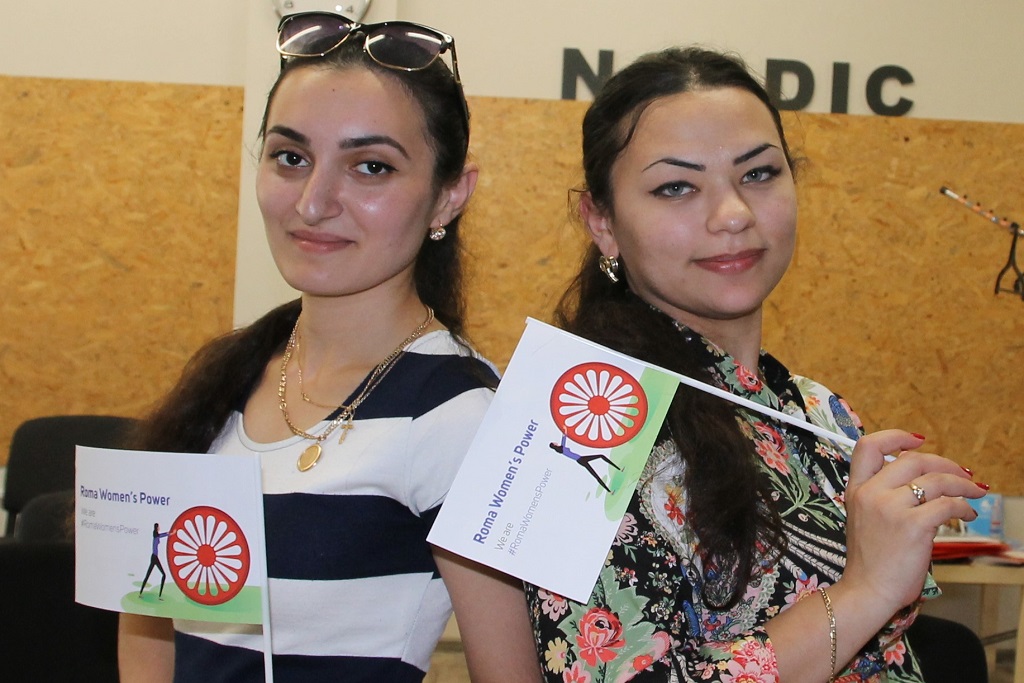 Rusalina Konstantinova and Nadezda Gerashenko are the leaders of the network of Roma women in Belarus.

Rusalina Konstantinova, 24, has just been elected as the leader of the network of Roma women in Belarus. Konstantinova has graduated from an institute of printing technology with good grades. She is a successful young woman who works as a deputy manager at a furniture shop and is currently hiring new employees to one of the company’s branches.

She is participating in the Deaconess Foundation’s Roma Women Power project to find out how she could encourage more Roma women to seek employment.

At the age of six, Konstantinova lost her father to kidney disease. Her father used to say that Rusalina would get far in life.

The young woman points out that she is an exception. In Belarus, 20% of Roma have not completed comprehensive school, and 12% of Roma who are over 10 years old are unable to read.

“They don’t go to school because it is considered more important for a young woman to stay at home and help her family. The benefits of that are immediate,” says Christina Nyback, Programme Coordinator at the Deaconess Foundation.

The road to school can be long and difficult, and children may have to face discrimination at school. There may also be language issues or they may be bullied. School uniforms and supplies are too expensive. Girls get married early and start having their own children.

Rusalina, the exception to the rule

“I was lucky in this respect,” says Konstantinova. “I was able to go to school and get scholarships. I have also experienced discrimination. For example, there was this driving school teacher who made fun of me. The teacher doubted what a gypsy woman would need a driver’s license for. If you are born a Roma, you have to be prepared to constantly defend your dignity,” she says.

“There is still a huge negative stigma, and it takes a lot of perseverance to push yourself into the world of business. I hope that the Deaconess Foundation’s project will help me with that,” Konstantina says.

Development Manager Anca Enache from the Deaconess Foundation has been involved in improving the status of Roma immigrants in Finland since 2008. Later on, the Ministry for Foreign Affairs granted funding which made it possible to carry out a project in Belarus, Ukraine and Moldova.

“In Moldova, Ukraine and Belarus, the work is coordinated by Roma organisations, which, surprisingly, exist in all these countries,” says Enache.

“The human rights situation of the Roma is poor in all of these countries, but there are differences depending on how effective the social inclusion is, how strong the human rights movement is and what the basic human rights are like in the society in general,” Enache says.

Many Roma choose not to reveal their ethnic background because they do not want to be profiled as Roma for fear of discrimination. In Belarus, where the population is about 9 million, the official number of Roma is around 7,000. The number is, however, probably many times higher.

It is difficult to find coronavirus data in Belarus. There are no official statistics or regulations, or if regulations exist, they are not followed in the unstable situation.

Konstantin Bankovski, 64, suddenly lost his wife, Ludmila Bankovskaya, eight months ago.  His wife had a high fever and was rushed to the hospital, where she passed away.  She had the coronavirus.

It is very rare to have a woman leading a Roma organisation. That is why Bankovskaya’s death was such a huge loss to Roma women in particular.

Her husband is grieving over the loss of a loved one. Their marriage, which lasted almost fifty years, was happy until the very end.

Fortunately, Konstantin and Ludmila’s daughter, Raisa, plans to continue her mother’s work. The daughter’s dream is to start her own business and offer employment to Roma women in particular.

Raisa Bankovskaya had to experience one of the dark sides of the Roma tradition when she was abducted for marriage seven years ago.

“I had only met the boy a few times, and I had not planned on getting married. The boy’s family kidnapped me and was going to force me to marry him. My father and mother fought to get me back,” she says. Later on, Raisa married a man she liked and is currently at home taking care of her young children.

Father Konstantin enrolled his pregnant daughter to her first education and has fully supported her in the background.

Konstantin Bankovski is also an exception to the rule: it is often the man who disapproves when their wife or daughter wants to become independent.

According to Nyback, it is important to get men involved in the project as their attitudes have a direct impact on women, either by preventing or promoting women’s chances of becoming more independent.

The enthusiasm, the courage!

In Belarus, minorities are at risk of becoming targets for ethnic profiling, violence and torture. Ukraine and Moldova have similar problems. The Roma are often unemployed and financially disadvantaged, but they also face hateful attitudes.

“What has amazed us Finns is the strength and enthusiasm that the local Roma women have,” Nyback says. “They are very brave and ready to face the challenge. It is women like Konstantina and Bankovskaya that this project needs.”

“It is important that Roma women from different countries get to meet each other and understand that they are not alone with their problems. You can learn best from other people’s mistakes and successes,” Nyback says.

“The good thing about the coronavirus is that it has enabled remote communication between Roma women from different countries. This seems to have worked surprisingly well! Young women from different countries are interested in learning how others solve their day-to-day problems.  Not only is this important for these women, but it also helps build more democratic societies.”

“Over the past two years, connections have been formed between the women that will hopefully last even after the project ends,” Nyback says. Around 50 women from each country are involved in the project.

“The topics of discussion include equality, human rights and employment. We have organised events and workshops online, and last year, we celebrated the International Day of the Girl and the International Romani Day despite the coronavirus.”

The Roma Women have received vocational and entrepreneur training, and they have been coached in things such as creating a CV, looking for vacancies and acting correctly in job interviews.

The Roma are the first to be arrested

“In Belarus, you can’t openly discuss human rights or empowerment, so instead, you have to talk about things like employment,” Nyback says.

“The project has helped over 50 Roma women to get vocational education and a decent job. Now Roma women work as cooks, confectioners, beauticians and some of them have started their own small businesses.”

You do not see the Roma fronting the Belarusian opposition. The reason for this is self-evident: the Roma are the first to be arrested.

At this very moment, a Roma organisation is seeking justice for one of the young Roma who was arrested and subsequently tortured.

Despite all this, Konstantin Bankovski remains hopeful.

“A new generation is growing up. In twenty years’ time, their children will certainly have better lives than we did, even in Belarus,” says Bankovski, who has experienced the Soviet era.

Rusalina Konstantinova also has faith in the future, at least in the long run. She is going to further her career and start a family. Have her own house, a good man and two children, as she sums it up. She believes that education and career can be combined with Roma family life.

“Why wouldn’t it be! Not just for me but for others as well!

Heini Saraste is a freelance journalist.